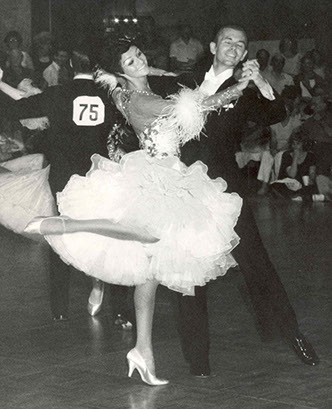 Brian McDonald, born in the heart of Scotland, Dundee, grew practically up in his parents dance school. He started ballroom dancing at age 4 and never left that environment. He started to compete at age eleven as a juvenile/junior, a category that was huge at the time in Great Britain and at the same time he was an active ice skater and enjoyed soccer.

Dancing became more important then all the other activities by the time he became fifteen and until he finished high school he danced as an amateur for Scotland with his first partner Sheila Downton.

Kristi, as she is known by most, grew up in Glasgow and was introduced to ballroom dancing by her parents. They sent her to dance school and her first teacher was Jim Graham. She enjoyed it so much; she decided to give competitions a try. Her first partner in the amateur field was Jim Oliver and by 1965 they became 7th in the British Amateur Latin Championship; 18 at the time. They stopped dancing together in 1966 though and Kristi found herself looking for a new partner.

In 1968 both, her and Brian went to the British Open in Blackpool and here is where they met and decided to have a tryout. It felt promising and Brian left Sheila to dance with Kristi, sensing that she would be the one for him; not only for dancing.

Within 6 weeks they were in the top six in the Scottish Amateur Championship and became Scottish champions in 1969, '70 and '71. All that time both their parents had supported their dancing; so they felt it was time to make this their profession. They turned Pro in late 1971.

Brian's first and only teacher until he turned professional was Mary Buchannon. She was a former Scottish champion and examiner for the Scottish Dance Teachers Alliance. She had taught already Brian's parents, so he felt no need for another teacher. When he made the final in the British Open Professional Championship in 1976 together with Kristi they both felt; now it was time to take more teachers on board. Also to get more exposure. They started to commute into London (7 hours drive) and work with Benny Tolmeijer and Bill and Bobbie Irvine. They also had some lessons with Anthony Hurley and Peter Eggleton, but their main coaches were Benny and Bill and Bobbie.

As Scottish representatives they made the final of the European Standard Championship three times and in 1977 when Richard and Janet Gleave took a one year hiatus, the were second. Richard and Janet won the European six times. In '77 the finalists in the order of placement were: Michael and Vicky Barr, Great Brittain; Brian and Kristy, Scotland; Wolfgang and Monika Tonnies, Germany; Frank and Bruni Gierok, Germany; Richard Wienecke and Ulla Jensen, Denmark as well as Espen and Kirsten Salberg from Norway. That same year they had their first encounter with the US and 'fell in love' with America.

"At the European Championship in Germany, Byron Charleton (fellow competitor and second in the British Champion with his wife Dorothy) came up to us and asked us what we were doing the next weeks." Brian remembered. "He wanted us to fill in for him doing a show at the Telemark Ball in Washington D.C. so we did a lecture that was already scheduled for the Scottish Dance Teachers Alliance and then flew to Washington on a Tuesday. We loved the whole experience and on our flight back we decided to come back on a tour. We had gotten invited by John Morton from Los Angeles (promoter) to do some shows."

Before they went back to the US though, they became finalists in the World Professional Championship in Tokyo and in 1978 in London. The finalists in order were; Richard and Janet Gleave, England; Michael and Vicky Barr, England; Tetzuo Kezuka and Chieko Yamamoto, Japan; Greg Smith and Marion Alleyne, (toaday Welsh), Australia; Chu and Susie Tanaka, Japan and Brian and Krisit from Scotland.

So in 1978 they went back to the US on a tour of shows they were able to organize; traveling from East to West and after that they knew for sure; this was the country where they wanted to live.

"One of our students came from Oklahoma City to us in Great Britain to take lessons. He suggested coming there and opening up a dance school. And in fact, that's what we did. It was a nightclub/dance school, very much like what you see these days with Salsa clubs where they teach in the morning and have the club going at night. It was called Kristi's. We were three partners and we hired bands like "Buddy" Rich and Woody Herman and also had our own band. In the mornings we were teaching or got people like Vernon Brock in for coaching."

This was very stressful for both though; they had to be up until 3:00AM and then get up early every day to help clean and setup again, then teach. So after a few years they headed West and gave the club up.

"We took our two boys Gary and Jason and drove to California and that's were we stayed. We started teaching there and eventually I became a delegate to the National Council of Dance Teachers Organization (today's National Dance Council of America)"

Brian and Kristi still competed when they first came to the US and were US National Professional Standard champions from 1979 to 1982. Since 1979, when Brian became delegate to the NCDTO, and took part in his first one, he never missed a meeting.

"I knew a lot of people in ballroom dancing from around the world, but in this meeting the only familiar face was that of John Kimmins. 80% of the delegates were from different performing arts societies, and that's why I did no know any of them. The ballroom standard and Latin and faculties were still quite small back then, but this has changed. The NDCA has three big fractions involved in the council now; the performing arts, the ballroom societies, and the teachers/coaches and organizers."

Brian became US delegate to the World Dance & Dance Sport Council (WD&DSC, todays World Dance Council; WDC) and their first dance sport chairman. Before it became the WD&DSC this council was the International Council of Ballroom Dancing, ICBD but by 1993 the name was changed and emphasis was also given to the sportive nature of ballroom. The council was divided into the social and the sprotive department. The last presidents of the ICBD after Alex Moore was Bill Irvine and then Leonard Morgan and the first president of the newly structured WE&DSC was Robin Short followed by Karl Breuer.

He did not run after that and decided again to concentrate on his homeland. "We have over 88 competition events nationally by now and generate more than 300,000 entries per year. Yes correct. That is more than anywhere else in the world. Also we were and are very fortunate to have so many immigrants that became Americans. They either danced already in their old country or chose to start here and now if you look at a big event like Blackpool, you see that 25% of the top 24 couples in every event are from the US!"

In 1980 Brian and Kristi started to organize their own competition; the Embassy Ball in California, which is co-organized since 2005 by Brian and Kristi, John Kimmins and Sam Sodano. It became one of the biggest international events in the US.

Gary McDonald, Brian and Kristi's son followed into the footsteps of his father and grandfather and became a competitor and studio owner. With Diana McDonald (nee Rogers) he became 10 times undefeated US National 10 dance champion and in 1997 World 10 Dance champion. Another family with three generations involved in ballroom dancing and in this case also bridging the old world with the new.